Bonnie is the side antagonist in Five Nights in Anime. She will not attack when the power goes out but does move like the other animatronics. She has a moving pattern similar to Chica's. She is light blue with a white chest and a red bow. She also has red cheeks. She moves on the 1st night.

Like Freddy and Chica, she starts at Show Stage, and she goes to Dining Area, Backstage(Repair Room),West Hall and to the Office.

Bonnie can be seen in the left door.

If she gets inside either while the player is holding the camera up or not she will instantly jumpscare him/her.

Her jumpscare is shaking her 'boobs' up and down and never changes. Even in FNIA 2. 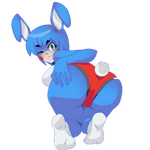 Add a photo to this gallery
Retrieved from "https://fivenightsatanime.fandom.com/wiki/Bonnie?oldid=4968"
Community content is available under CC-BY-SA unless otherwise noted.